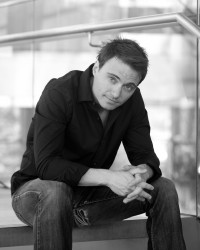 Recognized as an “energetic” performer by The New York Times, Italian conductor Christian Capocaccia has distinguished himself as an artist of keen insight and musicianship. His ease on the podium and comfortable coaching style with musicians and singers alike have made him a favorite with orchestras, opera companies and vocalists.

Beginning with the 2017/18 season, Mr. Capocaccia began a new three-year agreement with the Syracuse Symphoria, assuming the title of Associate Conductor and Youth Orchestra Music Director. He returned to Pittsburgh Opera in 2018 for a production of Donizetti l’Elisir d’Amore. In the 16/17 season, Mr. Capocaccia completed his 5th season as Music Director of the Stamford Young Artists Philharmonic and that Fall he made his company debut with the Pittsburgh Opera, conducting La Traviata. In the 15/16 season, Mr. Capocaccia took the Stamford Young Artists Philharmonic ensemble to New York City for their Carnegie Hall debut. For the Spring semester of 2016, he served as adjunct professor and visiting conductor with Montclair State University’s opera department. In the Fall of 2015 he returned to the Manhattan School of Music to lead the Philharmonic Orchestra in a symphonic concert. His performances with the Wallingford Symphony Orchestra in March marked his debut with that ensemble.

Mr. Capocaccia previously held positions as assistant conductor of the Dallas Opera, resident conductor of the Fischer Center at Bard College, assistant conductor of the IU New Music Ensemble, and assistant professor of conducting at the State University of New York College at Fredonia. He has conducted AsLiCo (I Capuleti e i Montecchi e I Racconti di Hoffmann, OperaLombardia), and has recently conducted operas with the Manhattan School of Music, and the Welsh National Opera. He is a former Aspen Music Festival Conducting Fellow, where he studied with David Zinman and Murry Sidlin.

Born in Rome, he attended the Santa Cecilia Music Conservatory studying under Paolo Ciociola and completed his studies with world-renowned violinist Nina Beilina in New York. Subsequently he studied composition under Boris Porena and Luciano Pelosi, and conducting with Piero Bellugi and Donato Renzetti. A graduate of Indiana University Jacobs School of Music in Bloomington under David Effron he has participated in Master classes with Herbert Blomstedt, Gustav Meier and Leonard Slatkin.

Christian Capocaccia has lead performances of Rigoletto and La Boheme for Syracuse Opera, where he will make his forthcoming debut with Macbeth.